I love pioneering, and going to new places. I love being in the middle of no where! When I’m in Townsville, I often ride my bicycle as far as my legs will take me, then look around and go: “Wow! No one would ever find me here!” I have a problem, I know! I love the sight of the untouched, pristine even wild looking land.

When I heard we were taking the ship to Siassi Island I got excited. One of our land based team had gone to Umboi Island just a few months beforehand. Siassi is the local name for what the Western world knows as Umboi Island. The team had gone on a scouting trip to find out what health services were available, where the ship could anchor and came back with heaps of stories… I heard that Umboi Island had one of the most recent sighting of …

dinosaurs…! Haha, oh the world we live in… I thought I’d check it out. If one looks on Google to get some information on the island… this is what they’d find:

During orientation, I was talking about where we would go with the ship throughout the outreach and for the first week, I told them we would go to Jurassic Park! I asked our local friends to tell us more about the rumours we had been hearing about dinosaurs… All I got out of them was a nervous laugh, and a stare, not denying nor confirming..! I might not have seen any dinosaurs during our time in Siassi, but I reckon if they exist anywhere, surely they could be hiding in PNG!

But don’t worry, Google isn’t where I get all my information… I love the Health Facility Map for PNG. 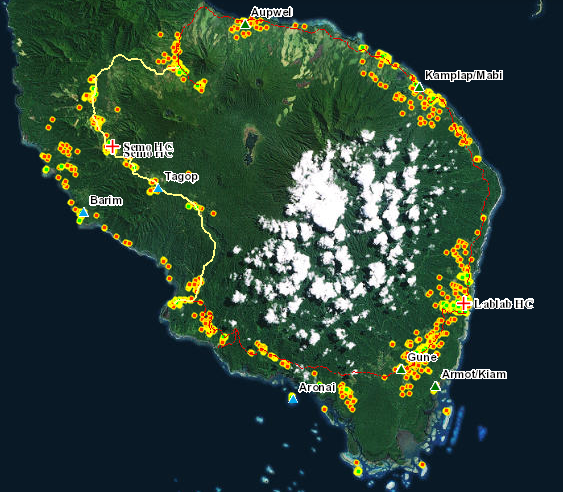 On this map of Siassi, every red dot is a house. This is a very good database for us to know if we’re going to be busy and where the health centres are. Zooming in, we saw that one island had over 100 houses on it’s tiny amount of land! Something we found in the area is that people are very attached to their piece of land and won’t relocate to the main land even if they’d have more space there… they’d rather have their neighbour within arm’s reach (really!). Personally I wouldn’t want to live on the mainland either if I thought it had dinosaurs! Haha!

In all seriousness, Siassi was gorgeous, and the people so welcoming! They did an official welcome for us and danced for ages, have a look at the video our media team put together and travel to Jurassic Siassi with me :)